Biography
Artist, critic and curator Qiu Zhijie was born in Zhangzhou, Fujian Province, in 1969. Having studied calligraphy from an early age, he graduated from the Printmaking Department of the Zhejiang Academy of Fine Arts (now China Academy of Art, Hangzhou) in 1992. His work is underpinned by his concept of Total Art, a response to globalisation in which he aims to integrate principles of western history and philosophy into a contemporary Chinese context, blurring the divide between ‘east’ and ‘west’. As a groundbreaking curator, Qiu was responsible for a notorious 1999 exhibition in Beijing, Post-Sense Sensibility: Alien Bodies and Delusion, as well as Long March: A Walking Visual Display in Beijing in 2002, the 2012 Shanghai Biennale, and the China Pavilion of the 2017 Venice Biennale. As a conceptual artist, his work has been shown widely internationally, including in Art and China After 1989: Theater of the World, Guggenheim Museum, New York (2017). Qiu Zhijie lives and works in Beijing, where he is Dean of the School of Experimental Art at the Central Academy of Fine Arts. 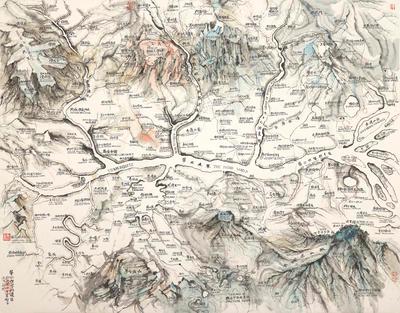