Biography
Taiwanese ceramic sculptor Hsu Yunghsu was born in 1955 in Kaohsiung, Taiwan. He was awarded a BA in 1975 from the National Pingtung Teachers College, after which he worked as a professional musician and music teacher, becoming celebrated throughout Taiwan for his mastery of the guzheng, the classical Chinese stringed zither. In 2003 he returned to study ceramics at the Graduate Institute of Applied Arts at Tainan National University of the Arts, and was awarded an MFA in 2007. He has undertaken artist residencies in Taiwan, the USA, Japan, Korea and the People’s Republic of China, and his work has been widely exhibited internationally.
Clay is an unforgiving and physically demanding material, requiring enormous technical skill, knowledge and physical strength to create large works. In an intuitive and tactile process of stacking, kneading, pressing, rolling, coiling, pinching, tearing and moulding, Taiwanese ceramic master Hsu Yunghsu uses white porcelain and black stoneware clays to create ambitious sculptural installations. The body of the artist is his principal tool: sometimes he leans his whole weight into slabs of clay to pound them flat, at other times he uses the most delicate pinch of the fingers to join two fine pieces together or applies a dexterous twisting motion to unfurl a winding ribbon of clay across another form. The structures that emerge from the hands of Hsu Yunghsu are like primeval forms, characterised by clusters of open pods, uninhabited cocoons, or undulating walls. Each large work is formed by an aggregation of smaller units, like cells that combine to form more complex organisms, with pitted and pierced surfaces designed for an interplay of light and shadow. Hsu Yunghsu lives and works in Tainan City in southern Taiwan. 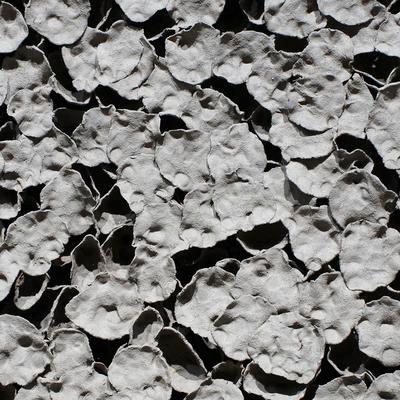 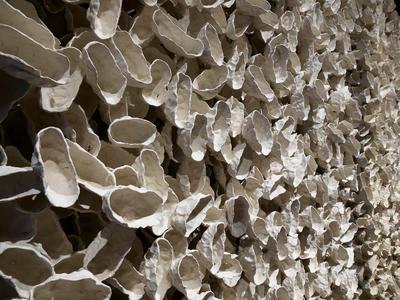