Biography
You Si was born into a family of artists in 1954 in Beijing: his parents were two celebrated and influential propaganda painters in the 1960s. As one of the first students to enter after the Cultural Revolution, You Si studied stage design at the Shanghai Theatre Academy and graduated in 1982. Later, during his course of employment as a stage designer at China Central Television, he was also very active in the emergent art scene, and created a large number of abstract ink-and-wash paintings. In 1987, You Si was invited to go to Australia as a visiting scholar. The following year, he left for the United States, staying there for the next 20 years. He was influenced greatly by the culture and art that he discovered in New York. You Si mixes the technique of traditional Chinese painting with the style of American Abstract Expressionism. A bold use of kaleidoscopic colours and patterns on rice paper characterises his large mural paintings, which are filled with gigantic flowers, mysterious organisms, swirls and distorted body parts. He has exhibited widely internationally, and his works are held in private collections and influential institutions worldwide. After living in New York for two decades, You Si returned to China and he now lives and works in Shanghai. 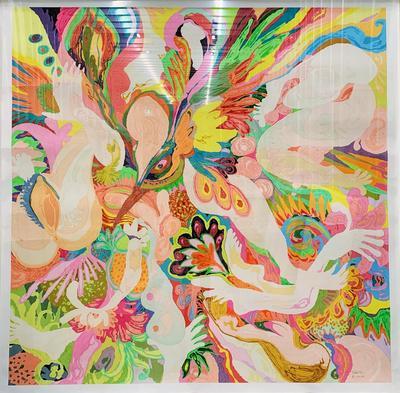