Biography
Chen Shaoxiong was born in 1962 in Shantou, Guangdong Province, growing to adulthood as Deng Xiaoping’s reform policies opened China to the world. Studying printmaking at the Guangzhou Academy of Fine Arts in the early 1980s, Chen experienced the decline of Soviet-style socialist realism, the style that had dominated Chinese art for the previous thirty years. His work reflects the social transformation he has witnessed during his life, and encompasses photography, video, drawing and animation. A founding member of the ‘Big Tail Elephant Group’ of Fluxus-inspired artists in the 1990s, and later a member of ‘Xijing Men’ artist collective, together with Japanese artist Tsuyoshi Ozawa and Korean artist Gimhongsok, Chen Shaoxiong worked at the cutting edge of the developing avant-garde in China. He participated in the 2005 Guangzhou Triennial, the 2003 Venice Biennale and the 2002 Shanghai Biennale, and with a global reputation, his work has been exhibited in solo and group exhibitions in China, Australia, the United States, Britain, Japan, Korea, and Europe. Chen Shaoxiong died in Beijing on 26 November 2016. 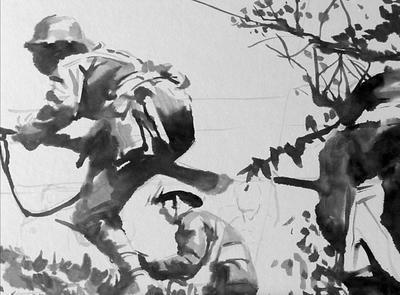