Biography
Shen Liang gained entry to the highly competitive high school affiliated to the Central Academy of Fine Arts at the age of 16, travelling from his home in Liaoning Province to Beijing, where he studied at CAFA in the Oil Painting Department, being awarded an MFA in 2003. The iconic motif in Shen Liang’s early oil paintings is China’s recent history – and in particular his memories of the period after the Cultural Revolution (he was born in the year of Mao Zedong’s death). He has recurrently depicted scenes of Beijing Opera and reproduced covers of Cultural Revolution propaganda books featuring revolutionary heroes such as Yang Zirong and Lei Feng. His thick impasto brushwork creates a 3D impression. Shen Liang’s more recent art practice is influenced by Chinese literati art and by gongbi court painting. Choosing mundane and even abject objects – dumplings and other snacks, seeds, flies and fruit peel – as his subjects, he blends western materials with strokes of Chinese calligraphy, creating the aesthetics of traditional ink art. In his work in the White Rabbit Collection he has painted onto handkerchiefs, which Shen says is based on his memory of his mother very occasionally bringing home sweet treats from her work unit, carefully wrapped in a handkerchief. 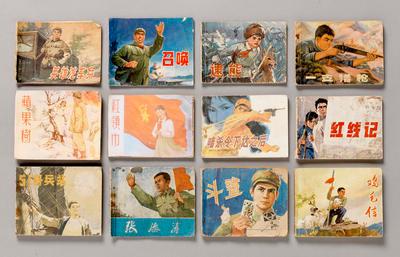