Biography
Born in Shenyang, Liaoning Province, in 1956, Li Linying is of the generation of Chinese people who had no choice about where or what they studied, or where they were employed. She graduated from Shenyang Aviation Institute Photography Department (now called Shenyang Aerospace University) and worked as an Art Editor at the Institute of Broadcasting and Television of Liaoning University from 1985 to 2007. She then moved to Songzhuang in Beijing to pursue a career as an independent artist, primarily a painter. Her work in the White Rabbit Gallery reflects her other interest in textiles, specifically in knitting. Opulent Banquet was created almost by accident: in 1998 she used some red and green wool left over from knitting a sweater for her son and created a knitted strawberry. Ten years later she had an installation of 1500 woollen strawberries – a cornucopia of plenty. 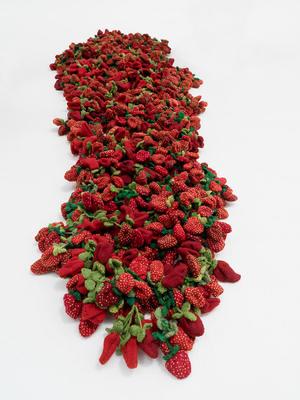