Biography
As a child in Henan Province, Jin Shi played with mud and stones, perhaps presaging an interest in constructing sculptural, 3D representations of real objects. His sculptural training at the China Academy of Art in Hangzhou was quite traditional, but there he was introduced to the work of a wide range of contemporary artists, including two sculptors that he particularly admires, the English Rachel Whiteread and the Australian Ron Mueck. In fact, he says, it was Mueck’s approach to size and scale, with figures either monumentally large or miniaturised, that sparked his interest in the possibilities of miniaturisation in his early works. Jin Shi’s interest in the living conditions of poor and marginalised people was also stimulated at an early age, when a relative who sold goods at the market came to live with his family. This relative was forced to share his living space with the mule who carried his products to the marketplace, which Jin Shi remembers finding quite shocking. Later, in Hangzhou, he became interested in the rural migrants who sold cheap, gaudy products at stalls in the streets. When he visited their small, overcrowded living spaces he considered the widening gap between haves and have nots in Chinese society. These experiences prompted the works in the White Rabbit Collection, Mini Home and Small Business – Karaoke. His work has been shown in solo and group exhibitions in Greater China, the UK, Europe, Chile, Brazil and Korea. Jin Shi lives and works in Hangzhou. 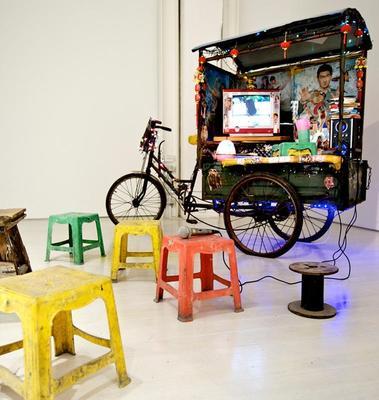