Biography
Born in Beijing in 1961, the son of Manchu intellectuals, Zhao Gang’s childhood was marked by the trauma of the times. He was one of the youngest participants in the second ‘Stars’ group exhibition in 1979, exhibiting his work with other members of the emergent avant-garde. Leaving China in 1983, Zhao studied in the Netherlands at the State Academy of Fine Art, Maastricht, then briefly at Vassar College in the United States in 1984. After some years building a successful finance career on Wall Street where he worked with an investment banking firm, he was awarded a master’s degree from Bard College in 1998. Zhao Gang lived in New York for over two decades before returning to China in 2006. With a distinctly internationalist approach to painting, his work has been exhibited widely, including in solo shows in China, Taiwan, Japan, the United States, Australia, Chile, Austria and Germany. Zhao participated in the Yokohama Triennale (2005); Performa, New York (2007); the Guangzhou Triennal (2009) and Art and China After 1989: Theater of the World at the Guggenheim Museum, New York (2018). Zhao Gang lives and works between Beijing and Taipei. 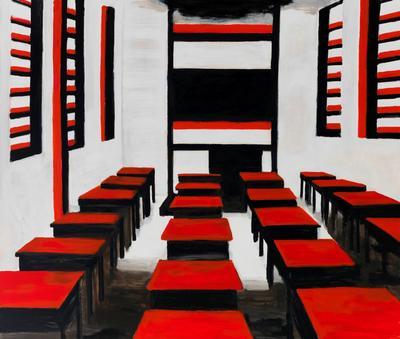