Biography
Xiao Lu graduated from the Zhejiang Academy of Fine Arts in 1989, where she had been influenced by the Bulgarian textile artist and teacher, Maryn Varbanov, to switch from oil painting to installation. Her graduation work, Dialogue, an installation of two telephone boxes with back views of a male and female figure and between them, a telephone on a plinth hanging off its hook, was intended to convey her belief that true communication between men and women was impossible. It featured on the front cover of Meishu Bao magazine and then, to her great surprise, was selected by the curators of the ‘No U-Turn’ major exhibition of contemporary art planned for the National Art Gallery in Beijing. This exhibition became known (in English) as China/Avant-garde, and Xiao Lu became instantly notorious when she took out a pistol and fired two shots into her installation at the opening. She and her companion, Tang Song, were arrested and (briefly) detained, the exhibition was closed, and the work itself became the stuff of legend, not least due to the debates about the nature and extent of Tang Song’s involvement, which Xiao Lu herself now denies. After the events at Tiananmen Square in June 1989, Xiao Lu came to Australia where she lived for some years. Subsequently, after her return to Beijing, Xiao Lu became involved with the ‘Bald Girls’ group of feminist artists, prior to developing a performance practice involving ink, ice, water, medicinal herbs, alcohol and, sometimes, calligraphy. She lives and works in Sydney. 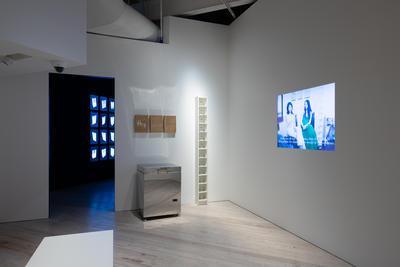