Biography
Art historian Wu Hung describes conceptual artist Wang Luyan’s body of work as ‘an untold story in Chinese art’ whose works are unlike any other, exploring themes of war, religion, philosophy and social systems. His recurring theme, however, is the notion of paradox. Wang has been involved in contemporary Chinese art since the late 1970s as a member of the avant-garde ‘Stars’ group. Unable to test into the art academy for political reasons, he was essentially self-taught. While holding down a day job as a lathe operator at the Beijing Furnace Factory and later as mastheads editor for China Communication News he enrolled in amateur drawing classes at the Workers’ Cultural Palace. But he stopped taking art classes, coming to believe they did more harm than good. Wang told Artsjournal writer Sheila Melvin: “I realized that kind of art ‘training’ is actually a poison to artistic enlightenment. In fact, the majority of people who go through it are harmed, and unlikely ever to become independent-thinking and creative artists.” In 1989, along with artists Gu Dexin and Chen Shaoping, he founded the New Measurement Group of conceptual artists. In the 1990s, Wang grew frustrated with Chinese artists’ reliance on the continuing influx of Western influences, and he withdrew from the art world for a decade. He began to exhibit widely again in 2007 making mechanical works that respond to China’s rapid modernisation. Since his participation in the seminal ‘Stars’ exhibition in 1979 and in China/Avant-garde at the National Art Museum in Beijing in 1989, Wang Luyan’s work has been exhibited widely internationally, with solo shows in Switzerland, France and South Korea as well as in China, and group shows across the globe. He lives and works in Beijing. 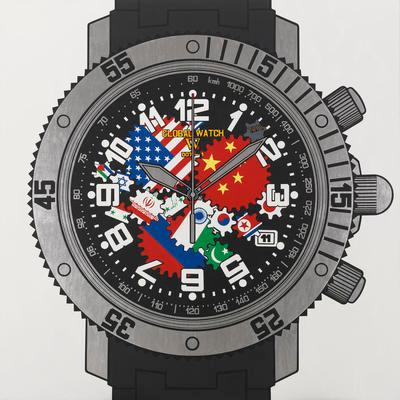