Biography
Wang Gongxin was born in Beijing in 1960, where, like other artists of his generation Wang Gongxin trained as an oil painter in the prevailing socialist-realist idiom. He taught at Beijing’s Capital Normal University for five years before travelling to the United States as a visiting scholar at State University of New York at Cortland and Albany in 1987. While Wang and his wife, fellow artist Lin Tianmiao (whose work is also represented in the White Rabbit Collection) were living in New York, he encountered video art, which was not widely known in China at that time. In 1993 he moved away from painting and began to produce video art and, two years later, returned to Beijing where he became a significant figure of the avant-garde. Wang was awarded the Martell Extraordinary Artists Award at the Chinese Museum, Beijing, China (2007) and was nominated for the Olivier Award for Best Set Design for Wild Swans, London, UK (2013). Wang’s work has been shown widely across the globe, including ‘Rotation - Wang Gongxin Solo Show’, White Cube, Hongkong; ‘SALON-IT'S ABOUT WALL’, Redtory Museum of Contemporary Art, Guangzhou; ‘Art and China after 1989: Theater of the World’, The Guggenheim Museum, New York, USA and ‘B3 Biennial of the Moving Image’ Frankfurt, Germany (all 2017). Other significant exhibitions include Inside Out: New Chinese Art (1998) at P.S.1 Contemporary Art Center, New York, USA; Revolutionary Capitals (1999) at the Institute of Contemporary Art, London, UK; Re:Duchamp, Travelling Exhibition (2001) at the Venice Biennale, Venice, Italy; Shanghai Biennial (2002) at Shanghai Art Museum, China; Guangzhou Triennial (2002) at Guangzhou Art Museum, China; Echigo-Tsumari Art Triennial (2003) in Japan; Projected Realities: Video Art from East Asia (2006) at Asia Society and Museum, New York, USA; The Real Thing: contemporary art from China (2007) at the Tate Liverpool, UK; Half-life Of A Dream: Contemporary Chinese Art From The Logan Collection (2008) at SFMoMA, San Francisco, USA; and Move on Asia: Video Art in Asia 2002 to 2012 (2013) at ZKM Media Museum, Germany. In Australia, Wang was the subject of solo exhibitions at the National Gallery of Victoria in 2014, Media Art Asia Pacific Space, Brisbane and at Contemporary Art Centre of South Australia in 2002. Wang Gongxin lives and works between Beijing and New York. 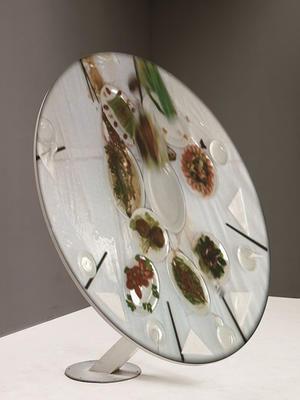