Biography
Born in Shanghai during the disastrous ‘Great Leap Forward’ into a family whose wealth, culture and education brought them under suspicion at different times during the revolutionary era, Chen Yanyin’s complicated personal history has long inflected her work. In 1977 she was assigned by the state to study jade carving at the Shanghai School of Arts and Crafts, one of the few art schools in Shanghai at the time, where she received foundational training in art and art history, and specialist instruction in jade carving. She excelled at the school and her graduation work ‘Apsara’ (飞天), a female spirit of the clouds and water inspired by mural paintings in the Buddhist caves at Dunhuang, was one of two works collected by the School. While working at her mother’s work unit, the Shanghai Mint, and continuing to study sculpture, she was finally accepted into the sculpture department of the Zhejiang Academy of Fine Arts, Hangzhou (now the China Academy of Art.) She was one of two female students in the intake of six. After graduating in 1988 Chen Yanyin was employed at the Shanghai Oil Painting and Sculpture Institute, established in 1965 as a dedicated practice and research organisation for artists in Shanghai, where she worked for more than 30 years. Chen also completed a masters degree at Sydney College of the Arts in 2000. She has participated in avant-garde and women’s art exhibitions in Shanghai and around the world and she has created many of Shanghai’s public sculptures. Her work was shown in the 2nd Asia Pacific Triennial, Brisbane, in 1996, Kassel, Germany (1998), Vancouver (1999), Singapore (2000), and in the Third Shanghai Biennale (2000). In 2008, Chen Yanyin received the “China Sculpture Grand Prize” for her work “My Mother 1956, 1963, 1998”. Recently Chen Yanyin’s work has been shown at Myth/History in Shanghai's YUZ Museum. (Sources: ShanghArt Gallery and Claire Roberts.) 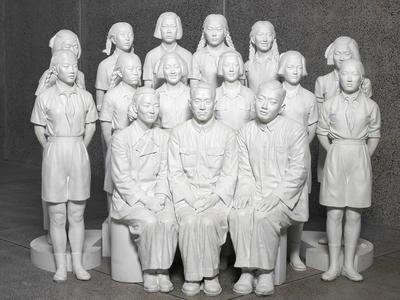