Biography
Born in Xiamen, Fujian Province in 1954, Huang Yongping studied painting at the Zhejiang Academy of Fine Arts (now the China Academy of Art) in Hangzhou just after the Cultural Revolution, graduating in 1982. In 1989 Huang Yongping participated in Magiciens de la Terre in Paris, one of the first exhibitions outside China to show work by Chinese avant-garde artists. The Tiananmen events took place while Huang was in Paris and he lived there ever since, representing France at the 48th Venice Biennale in 1999. Since 1989 Huang’s work has been shown in significant exhibitions and museums in China and internationally, including Art and China After 1989: Theater of the World, Guggenheim Museum, New York (2017). A travelling retrospective, House of Oracles, was shown at Ullens Centre for Contemporary Art, Beijing (2008), Vancouver Art Gallery (2007), MASS MOCA, Massachusetts (2006) and Walker Art Center, Minneapolis (2005). Huang Yongping died in Paris on October 19, 2019. 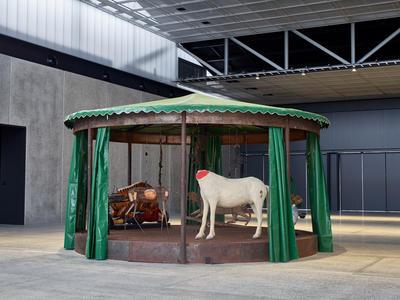