Biography
Chen Wenling achieved international fame with his characteristic ‘Red Memory’ series of sculptures featuring laughing, naked male figures covered in shiny, bright red vehicle duco. This series, started in 1999, was inspired by nostalgia for his boyhood in Fujian; the figures are intended to prompt memories of childhood innocence in the viewer, while the brilliant red colour signifies China in the ‘red times’ of his Cultural Revolution childhood. Returning to his rural hometown after a bout of stress-induced illness and insomnia in the late 90s, he watched his young nephews and neighbours’ children playing, and marvelled at their spontaneity and lack of guile, in contrast with the increasing materialism and rampant ambition of the late twentieth century Reform and Opening era in China. He said, ‘I realised that all this time we had been chasing life, when life was strangely just before us.’ Influenced by three factors – the folk arts of Fujian Province, the elite imperial art of Tang Dynasty porcelain and by his sculptural training within the academy – Chen’s works are intended to bridge divides between popular culture and ‘high art’. Other works such as the ‘Happy Life’ and ‘God of Materialism’ series have somewhat darker themes, and the frequently recurring image of the pig represents materialistic excess as well as being a more positive image of prosperity. These works may be understood as a satire on the unthinking optimism and acquisitive competitiveness of his contemporary society; the animalistic human figures and the exaggerated animals alike represent unchecked greed. 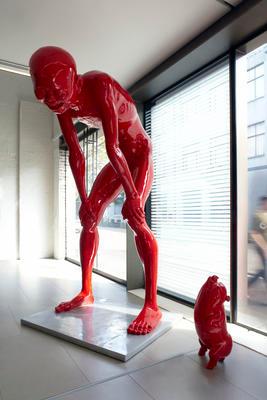