Biography
Chen Wenbo received his training at the Sichuan Academy of Fine Arts and is considered one of the pre-eminent figurative oil painters in contemporary Chinese art. Chen’s detailed Photo-realist paintings place him in the Chinese contemporary realist movement, where he and his contemporaries represent quotidian objects and the everyday. Working on a monumental scale, using vivid colour and minute detail, Chen comments on contemporary urban life with subjects as banal as toilets and washbasins. Chen Wenbo has said that his interest is always primarily ‘in the surface of things’. Critic and curator Hou Hanru described his works as landscapes of an ‘after-soft-drug’ world: ‘They appear to be banal at the first glance. But they become immediately intriguing when you look at them more closely. They are figurative, but without any human figures. They are no-man’s lands just left by by-passers, by intruders and longing to be re-occupied by other by-passers and intruders…’ His brightly-coloured fictional world is like a strange Utopia – a ‘Chinese dream’, perhaps, with all the satirical connotations that the phrase might imply. Chen’s work is held in major public collections and has been exhibited internationally. 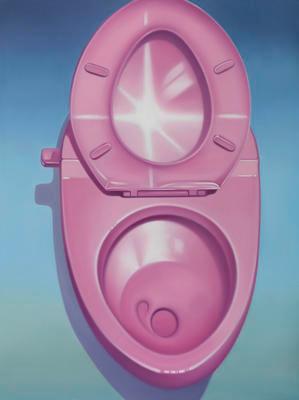