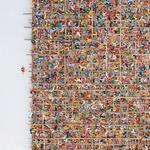 Notes
Qin Fengling focuses on what she identifies as the pressing issues of her own time: greed, aspirational materialism, pollution, over-crowded cities and a loss of identity. She says, ‘I feel I am just using art as my own language to communicate with society – everyone should find their own way to be able to do this. I have lived in this society for more than 50 years and I have an obligation to communicate my ideas about social interaction in some way.’ Her subject is the complex interrelationships of people and systems in contemporary society. She sources her ideas from newspaper and TV stories, and her own experiences of a changing world: traffic jams, social conflict, terrible waste, pollution and over-consumption. The hundreds of little figures on each of her canvases are almost, but not quite, identical – a reminder of the collectivist ideology of her youth, in a social structure that created obligatory conformist identities as obedient servants of the socialist state and the Motherland. Her miniature people struggle to escape chains, grids and scaffolding, are trapped in horrendous traffic, scramble through construction sites, or tumble over each other in a reminder of the sheer enormity of China’s population. Scaffold further breaks down the two-dimensional picture plane. A chaotic wriggling mass of tiny figures clambers over a grid-like structure made of wooden sticks, trampling over each other in the race to get ahead, up the ladder of success. Some fall, or are thrown, whilst others cling precariously. The work is both humorous and anxiety-provoking. Critic Wang Baoju wrote that Qin Fengling’s works convey ‘…the notion of being submerged by the crowd, the feelings of being controlled without independence and of losing one’s individual consciousness… the history and the transformation of society.’