Notes
Repeated, apparently mundane actions have been the hallmark of Zhang Peili’s work since 1988, when he presented what is generally acknowledged to the first video work made in China at the Huangshan Conference: 30 x 30 was the start of Zhang’s ongoing experimentation with performative, durational, and text-based installations. He filmed his own hands in surgical gloves breaking a 30-by-30-centimetre mirror (approximately the size of a TV screen), painstakingly gluing the shards together, and repeating this simple action again and again, against the terrazzo-tiled floor of an empty office. Filmed over three hours (using the longest videotape available at the time), this incomprehensible action reflected Zhang’s determination to avoid political imagery and narrative. Over the next four decades, Zhang Peili continued to focus on the repetition of everyday, apparently routine actions: by forcing us to examine these more closely, Zhang introduces subtle critiques of power and authority. Similarly poetic and ambiguous, Zhang’s 2016 installation ‘The Endless Walkway’ (the Chinese title, translated, is ‘The Walkway with a Visible End’) consists of a series of semi-transparent national flags made from white lace, including those of North Korea, Germany, Russia, France, the United States, Japan, Syria, Iran, Israel, India, and China. Zhang Peili chose lace, he says, because they suggest a ‘dissolving’ of their political nature and the sometimes antagonistic relationships between the nations represented. He sees their white colour as apolitical – but of course, a white flag also implies surrender. Operated by motors, they are continuously raised and lowered, and this activated ‘walkway’ leads the viewer towards a video monitor showing sites of pilgrimage and tourism, including Buddhist temples, the Taj Mahal, famous mosques and Christian churches.
First shown in ‘Real Illusions’ at Shanghai’s 21st Century Minsheng Museum in April 2016, ‘The Endless Walkway’ was interpreted as a response to the dramatic increase of global migration, and the political struggles within Europe (and Australia) as nations sought to come to terms with the implications of these border crossings. The curators, Jiang Jiehong and Mark Nash, stated that Zhang Peili’s installation had been inspired by the continuing humanitarian crisis of refugees in Europe, but the work is intentionally ambiguous – the lace flags operate like domestic curtains or blinds, alternately revealing and concealing, in a tantalising shadow play of opportunity or invitation offered and withdrawn. As in other works in which Zhang Peili has used flags and symbols of nationhood, he questions the meaning of territorial boundaries. This work, which appears almost shrine-like, invites us to pause and consider this historical moment – a time of escalating crisis, spiritual emptiness, and loss of faith in institutions of church and state. 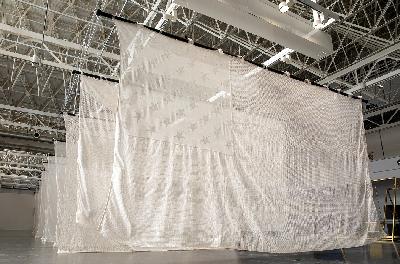