1949 - The Young Pioneers of Communist China

Notes
From the ‘Mother Series’ of works based on the life of Chen Yanyin’s mother, Wu Ruidi, this sculpture is developed from a family photograph: Wu Ruidi’s graduation photograph taken in 1949 at the Christian Girls School in Shanghai that she had attended since primary school. She does not wear the red Young Pioneer communist youth organisation scarf, an indication that her family background was not sufficiently revolutionary (they were not workers, peasants or soldiers) to allow her to become a member of the first generation of Young Pioneers. The figures were modelled in clay before moulds were made for casting as separate editions in bronze and in fibreglass. The work, painted white, is like a blank canvas at the dawn of the establishment of New China, symbolising the hopes of a generation – but white is also a colour of mourning in China. 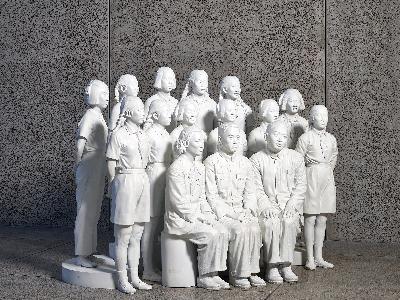