Notes
Tian Xiang: Forest of Stone Steles (Sixth Series) (2017) is an installation of twenty-four ‘ru stones’ representing the seasons of the ancient Chinese calendar. Gu named the boulders, a kind of marble found near the birthplace of Confucius in Shandong Province, ‘ru’ rocks: the character ‘ru’ refers to Confucian scholarship. They have been carved with unreadable, hybridised simplified characters that name the twenty-four ‘seasons’ of the solar calendar. The first, ‘Spring Begins’, is followed by ‘The Rains’ and ‘Insects Awaken’. The year ends with ‘Winter Solstice’, ‘Slight Cold’ and ‘Great Cold’. Gu Wenda once again returns to ancient China to critically reflect upon our twenty-fist century distance from the rhythms of the natural world and its cycles of ploughing, planting, cultivation and harvesting. The rocks themselves, billions of years old and originating in the depths of the ocean, contain fossilised aquatic creatures. Gu’s characters are ‘wrapped’ around each rock, so that they cannot be read from any single viewpoint. With the characters the only polished parts of the stone, they recall the stones placed outside parks in China, or intaglio seals from the distant imperial past, but they also evoke the ‘earthworks’ of the 1970s such as those by Michael Heizer, Walter de Maria or Robert Smithson. 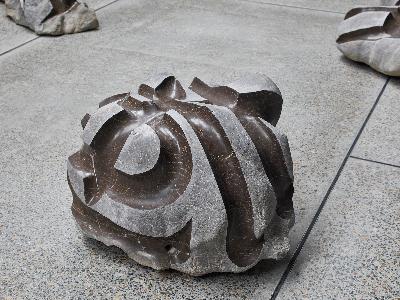