One Hundred Years of Repose

Notes
One Hundred Years of Repose (2011) is based on Hubert and Jan van Eyck’s 1432 Ghent Altarpiece. In twelve sections, Yu Hong’s re-invention shows groups of people sleeping, based on photographs sourced online. Yu Hong replaced the standing figures of Adam and Eve from the outside panels of the Van Eyck painting with two inverted figures depicted from an aerial perspective: on the left, a young man dressed entirely in black sleeps, arms across his chest and legs elegantly crossed too, his shiny black boots pointed at the arched top of the panel. He is paired on the right-hand outer panel with a young girl clothed in a white slip. These two figures appear to extend slightly beyond the edge of the picture frame, a deliberate visual disruption that creates a sense of unease. The adjacent panels depict sleeping children with luscious bright pink draperies, like Renaissance angels. We look down on them from above, from the same vantage point used for many other figures in this complex composition, a perspective that Yu Hong denies by painting other figures frontally, a device perhaps derived from her interest in the hieratic representations of Egyptian tomb painters. The figure of Christ in the central upper panel of the Van Eyck altarpiece is now a defiantly secular image of people with straggly hair and rumpled clothing. They are flanked by male and female archetypes, covered with white satin drapery. On the Beijing subway Yu Hong had been observing sleeping commuters, and reflecting on the sheer exhaustion of living in this fast-paced city at the centre of China’s rising economic power. She says, ‘The pace of development is too fast and the pressure on the individual is too high.’ The central panel at the bottom of the work presents a horizontal row –– a boy with a book, an older man wearing a suit jacket over a white business shirt, a huddle of teenage girls, another boy with a laptop computer –– all collapsed against one another unselfconsciously like people on a long and uncomfortable train journey. In their oblivion, they are trapped in the gold background; Yu Hong has painted shadows around them to suggest water rising around their legs. The painting takes its title from the first line of a popular song used in a 1980’s television drama set in the Qing Dynasty: ‘After one hundred years of repose, our countrymen are slowly waking up.’ At the time that Yu Hong painted the work it seemed that China’s economy was on an unstoppable, meteoric trajectory. But she says, ‘For me, China is still asleep.’ 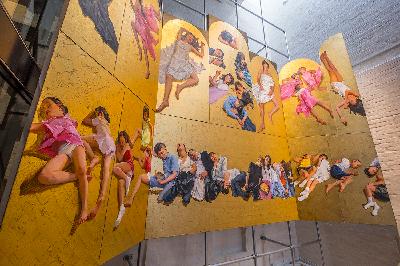