Notes
Shi Yong invented a character – the ideal ‘new Shanghai’ citizen – who wears a Mao suit and sunglasses and sports a fashionably asymmetrical haircut. He asked volunteers to vote online for the ideal ‘new Shanghai look’, and in Continuous (the video made in 2004) he transformed thirty-one individuals into almost identical versions of this identity. Thus Shi merged China’s Maoist past with its contemporary embrace of capitalism, which is exemplified by style, fashion, celebrity culture and ‘branding’. This ‘Shanghai Visual Identity Project’ had begun in 1997 as a satirical conceptual piece, when Shi asked western visitors at an exhibition to assess twelve self-portraits sporting different ‘looks’ and to decide which was the most appropriate for a citizen of the new Shanghai.
At the end of the twentieth century, and again in the period leading up to the international Shanghai Expo in 2010, the city was covered with political slogans –posters, banners and advertisements – exhorting the populace to ‘align with international trends’, to fashion for Shanghai ‘a new look every year’, and with instructions on how to be ‘an attractive Shanghainese.’ The result of his survey was the new ideal, with dyed wavy hair, Italian leather shoes, a pristine white business shirt and on-trend dark glasses. Shi Yong satirises the slavish desire of Chinese artists in the 1990s and early 2000s for approval and interest from foreign institutions, curators and collectors. Tongue-in-cheek, he asked, ‘What is the appropriate image for a contemporary Chinese artist attempting to align himself with global trends?’ 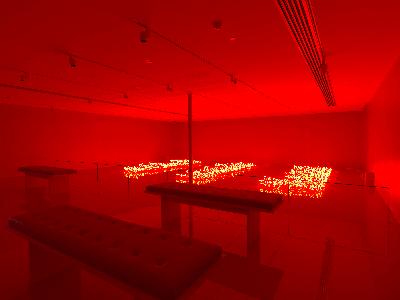